The rings of population of the Colombian Amazon is the continuation of the national peripheral urban system in the south of the country, a phenomenon that is explained by the social construction of the territory and means the consolidation of urban-rural, through the network of populated centers and roads, anthropic cover crops (pastures and cultivation), areas of intervention - transformed areas - and population concentration in urban areas. It is based on continuous construction for the production and circulation of goods. The ring of population is a common scenario, both for the Colombian Amazon and for the rest of the Amazon countries.

The urban structures, through the road network, advance penetrating the Amazon region from its periphery towards the center, supported by the regions already consolidated by hierarchies and urban typologies, forming a continuous patch that closes the ring of population, and then extends over the rest of the Colombian Amazon. Thus, protected territories, special management areas and indigenous communities (resguardos, biases, ancestral territories or territories of nomadic indigenous communities) are affected and, consequently, the functional structures of the natural Amazon ecosystem are altered, due to the extractive-productive activity of the generation of surplus (self-consumption and marketing).

Monitoring of the surface of the Amazon territory within the rings of population assists in keeping track of the development and advancement of urban settlement and occupation in the region, which takes as input the cover maps elaborated by the SINCHI Institute. These transformed areas constitute the nucleus of the population settlement; located there are the urban areas and the production zones, which will be structured by means of a terrestrial and fluvial road network, which together make up the Amazon settlement ring.

In order to calculate the extension of the Amazon´s ring of population, we consider the transformed areas and the area of ​​influence of the terrestrial and fluvial routes, since the existence of these networks allows for the flow of materials, energy and information, as well as the development of the cultural and social life of its inhabitants. The configuration of the ring of population in the years 2002, 2007 and 2012 reveals the progress of this occupation process. For the year 2002, the extension of the ring was calculated in 92.608,19 km2; For 2007 its area totaled 94,856.81 km2, a growth of 2% in relation to the first referenced year, and in 2012 reached 105,557.39 km2, a growth of 10% compared to 2007. 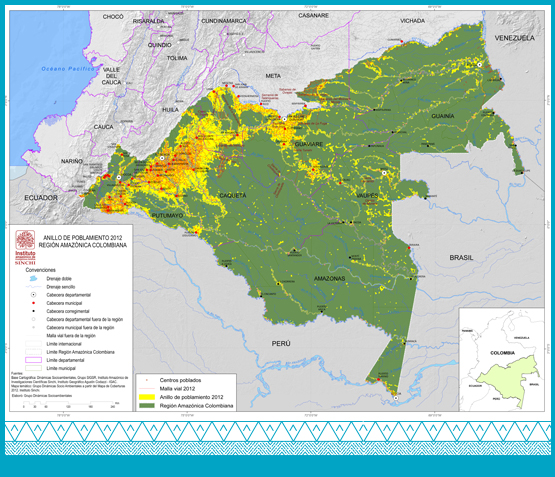