Under this vision, the concepts of hydrographic, biogeographic and political-administrative boundaries have been incorporated, seeking a comprehensive approach. The proposed regionalization thus comprises the boundary of the hydrographic basin in the western sector defined by the natual water devide; in the northern sector, as far as the coverage of the Amazon forest; and in the South and East applies to international political borders. Its surface is estimated at 483,163 km2.

From a biogeographic point of view, this delimitation is based on the impact of the Andean-Amazonian rivers on the ecosystems of the piedmont and the plain of the region. Politically, it covers the southern part of the Vichada department; the southeast of Meta; the entire territory of the departments of Amazonas, Caqueta, Guainía, Guaviare, Putumayo and Vaupes; the Bota Caucana; and the Amazonian slopes of Nariño (the upper part of the rivers Guamuez, Sucio, San Miguel and Aguarico). (Salazar and Riaño, 2,016).

The Colombian Amazon region is defined by the "SINCHI" Institute as follows: starting from the mouth of the Vichada River in Orinoco, it follows its river plain by the south bank. Then with a south-eastern course, it passes through the source of the Uvá, Iteviare and Siare rivers, until reaching the mouth of Caño Jabón on the Guaviare river. Up the Guaviare River, you continue until you reach the Ariari River. It´s used to continue upstream to the mouth of the Güejar river and continues upstream to the source of the river Sanza that is derived from the Barrialosa ravine and the Peñas river. From this point, in a straight line to the west, until finding the Guayabero river , which is followed until its source in Cerro Triunfo. From there, we continue southwards, dividing the Amazonian rivers up to the border with Ecuador. The polygon is completed following international Amazon limits with Ecuador, Peru, Brazil and Venezuela, until its closure at the mouth of the Vichada River over the Orinoco. 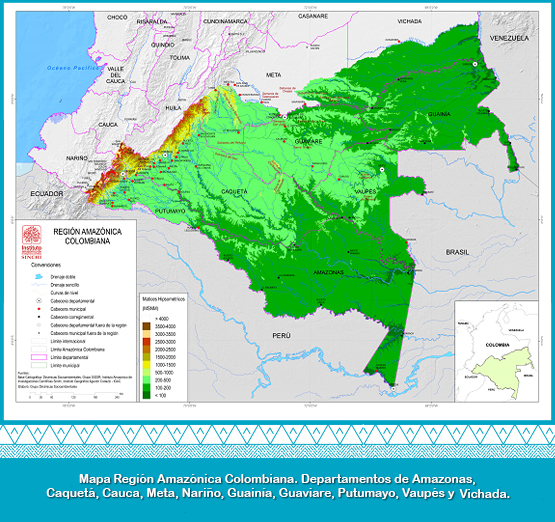