Subregions of the Colombian Amazon

In the last two decades, as a result of processes such as the spread of illicit crops, the progress of illegal mining activities, political-administrative decentralization, new institutional conditions in the region, the division initially proposed as Northwestern Amazon and Southeastern Amazonia has begun to give way to new realities, explained by the process of expansion of the settlement ring, as an advance of the urban structures of the country, that penetrate the jungle from the periphery to the center and now from the so-called geopolitical and economic-extractive enclaves of the border towards the center of the region, seeking to connect with the rest of the country. The dynamics of this settlement, of finding support with already consolidated regions and advance, in continuous marches, first closing the ring and then continuing towards the center is maintained, encountering the vectors of occupation that come from the periphery in search of the center.

Considering the processes of occupation and anthropic intervention and not only from the point of view of its actors, but also from social, economic and environmental relations, it is possible to divide the Colombian Amazon region into four mutually differentiating and contrasting subregions: Western Amazonia, Northwestern Amazonia, Eastern Amazonia and Southern Amazonia. This approach surpasses the vision that indicates the great regional homogeneity and shows that the Colombian Amazon as a region does not present a clear socioeconomic and environmental integration, being necessary, therefore, to speak of a socially constructed territory, where there are different domains that have different singularities. The current limits of these subregions are drawn taking into account the importance of the environmental, social and economic specificities determined by appropriation, occupation and consolidation processes of the anthropic activity, by intensity. (Salazar and Riaño, 2016). 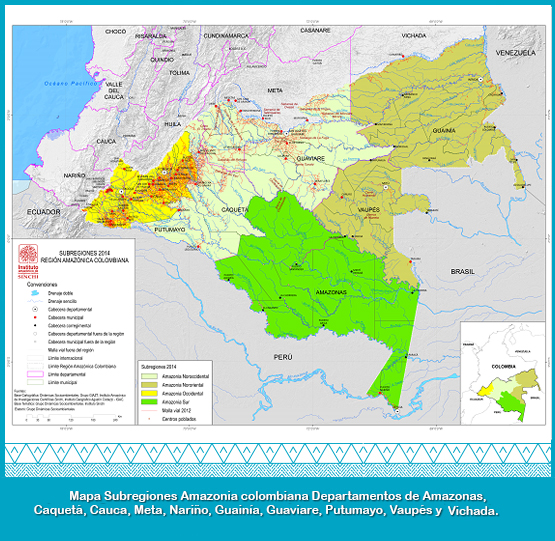