It refers to the tropical humid rainforests of the south-east of the country. This delimitation in its northern section exceeds the limit of the Amazon river´s riverbasin, its coverage extending to the Vichada river, meaning, it includes part of the Orinoco river basin to the north and in the Andean-Amazonian region it reaches, on average, up to 500 m.a.s.l.

In order to establish the area of ​​the Amazon rainforest for the year 2012, we relied on data from the coverage map and the physiographic landscapes of the region, mountains and plains. It was estimated that the Amazon rainforest - under 500 m.a.s.l.- has an extension of 390,707.6 km2, equivalent to 96.67% of the total rainforests in the region. The remaining 3.33%, or 13,452.22 km2, corresponds to the Andean forest in the mountain landscape within the regional Amazon territory.

The area of ​​the Amazon rainforest is equivalent to 80.86% of the region. The permanence of these natural coverages is threatened by the constant advance of anthropic activities by transforming them into areas of pastures, crops, urban and industrial constructions and mining operations. (Salazar and Riaño, 2016). 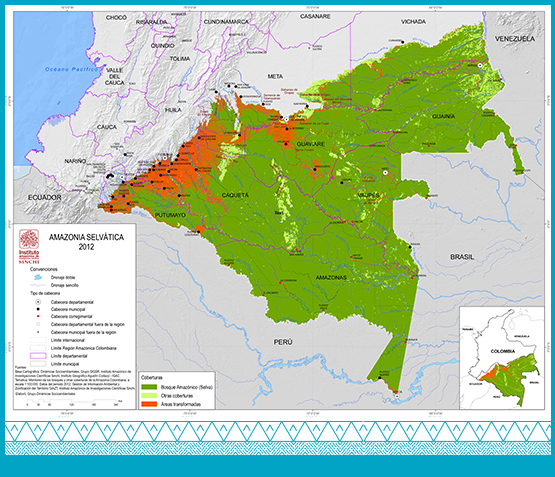