It corresponds to the part of the slope or hydrographical area of the Amazon river, that is in Colombian territory. In its watershed there are heights greater than 4,000 m.a.s.l. This delimitation supports the importance that the Andean-Amazon rivers have on ecosystems of the piedmont and the Amazonian plain, as an ecological function for their preservation. According to the hydrographic zoning map of Colombia (IDEAM, 2010), the hydrographical area of the Amazon River has a calculated area of 341,994.37 km2 in Colombian territory. This area is made up of nine hydrographic zones of the following rivers, in descending order by surface percentage: Caqueta (29.23%), Putumayo (16.94%), Apaporis (15.65%), Vaupes), Yari (10.86%), Guainia (9.15%), Caguan (6.07%), Amazonas (0.96%) and Napo (0.13%). These hydrographic zones are divided into subzones that for this slope add up to 57. (Salazar and Riaño, 2016) 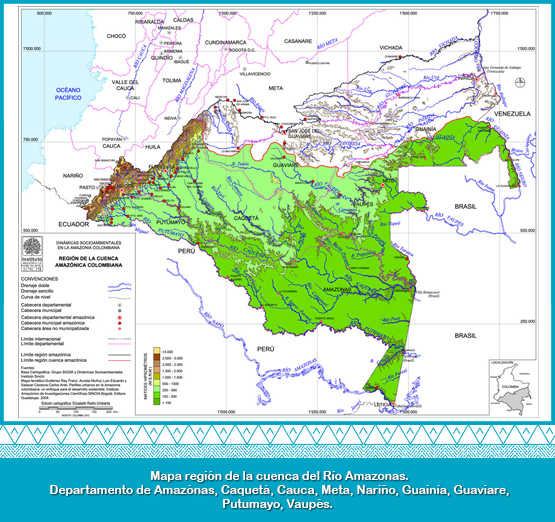