The system of settlements in the Colombian Amazon region is understood as a social construction of space, as different logics of territorial appropriation and use, of segmentation and segregation of it and its human conglomerates, explainable by the historical, political, economic, social and cultural process. Be it farms, small rural villages, settlements of indigenous communities, municipal centers or cities, which undoubtedly are social constructions, identifiable through the roles or functions that they predominantly exercise and that allow them to achieve identity and functionality in the territory.

The result of this is the territorial fragmentation resulting from socioeconomic differentiation, which can be expressed in subregions as socially constructed spaces and as hegemonies of power and in different types of settlements (Salazar and Riaño, 2016).

They are the urban centers that concentrate the largest number of inhabitants, present the most important services and equipment offer within the department, as well as greater administrative development and current revenue of the Nation. In the region are: Florence, San Jose del Guaviare, Leticia, Mocoa, Inírida and Mitu. 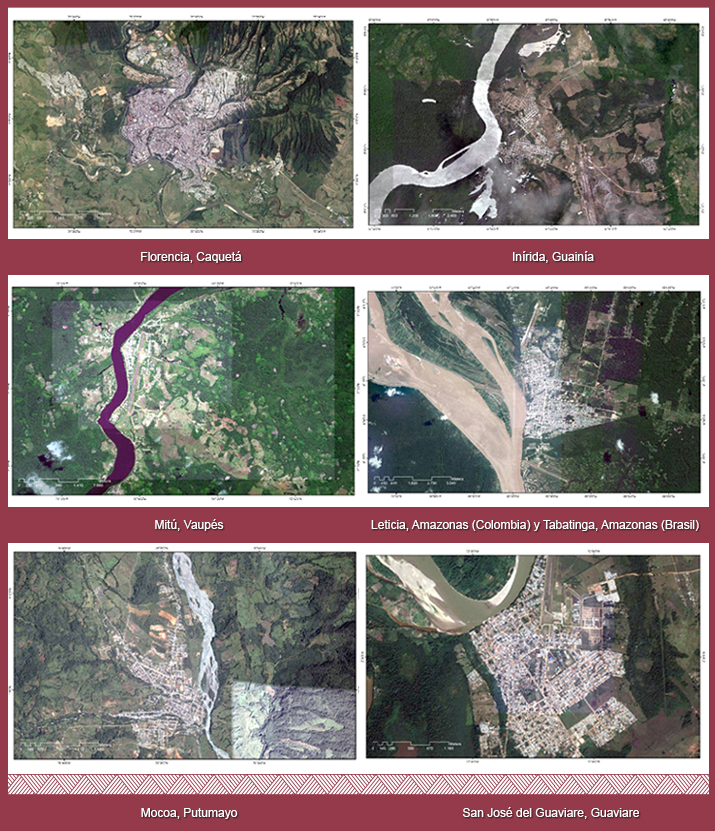 They are areas of consolidation of colonization because they are part of the oldest settlement and occupation spaces. There the population is concentrated, as well as the offer of economic, social, cultural and institutional services, equipment, and attempts of establishing agroindustries and with a strong dependence on the central State. They exert great influence with respect to more distant areas with agricultural, livestock and forestry predominance. An example of this is Puerto Asis, San Vicente del Caguan and 44 more centers. There is constant pressure nn these centers for access to services and for the possession of urban land, giving rise to new dynamic fronts of rural-rural and rural-urban migration, since the expulsion of the population is frequent for economic reasons (cost, concentration and high land prices) and extra-economic (violence). Consequently, there are manifestations of urban marginality, concentration of ownership and strengthening of the tertiary sector; low levels of productivity, employment and surplus production. 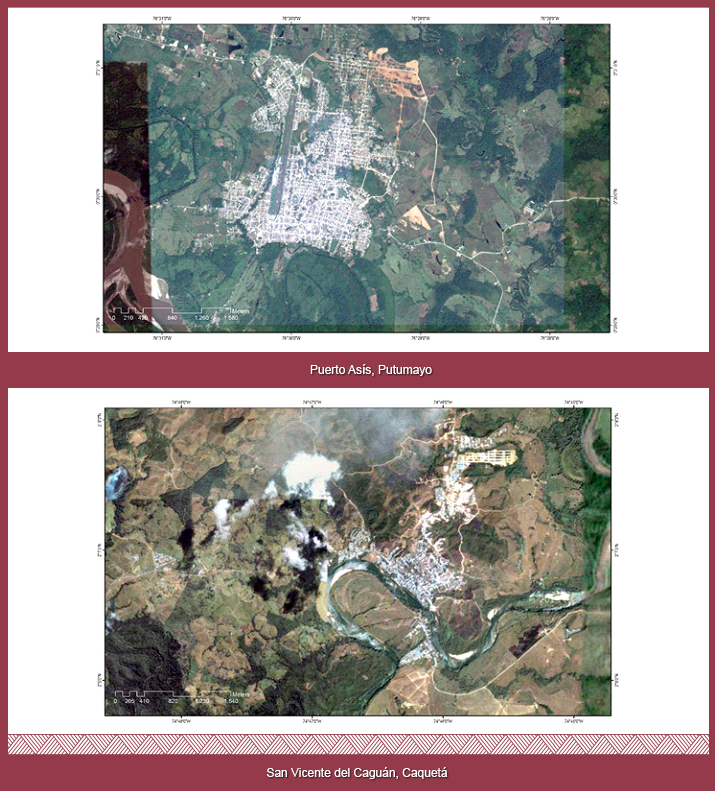 They represent the area of consolidation of the urban population with predominance of indigenous population. They offer minimum social, economic and administrative services for the indigenous and peasant-settler population that inhabit them. Among them are: Mapiripana, San Felipe, Puerto Colombia, La Pedrera, Tarapaca, La Chorrera and fifteen more. 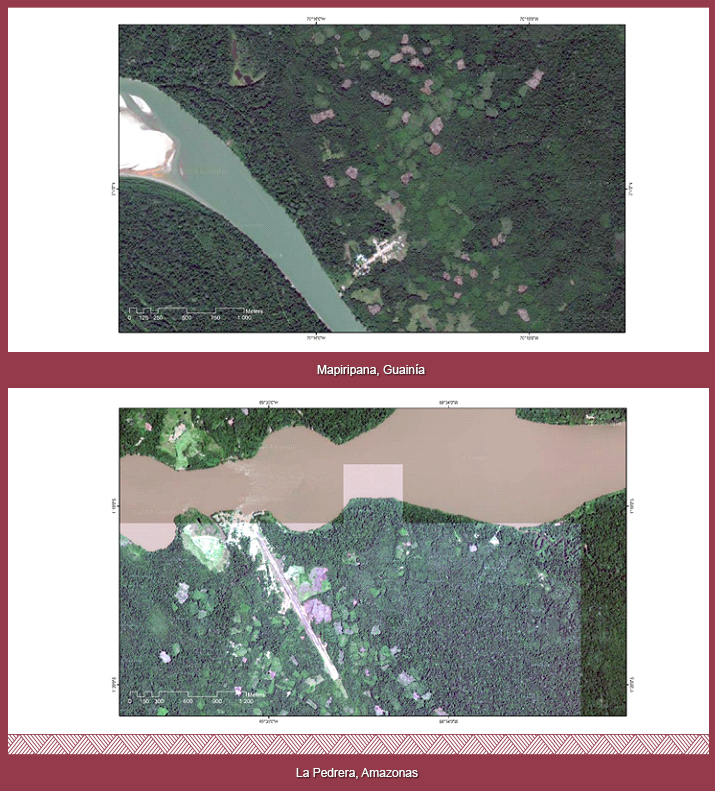 They correspond to so-called hamlets, centers of police precints and centers of the municipal corregimientos, they are known as "stirrups" of the occupation and are communities of small dimensions that fulfill epicentral roles for certain geographic areas. They have little supply of social, economic and administrative services for the population. Its area of ​​location is considered transitional and intermediate between the colonization consolidated and the fronts of colonization; Extensive cattle farming predominates and in some cases small farms and some agricultural activities of some commercial importance. Among them are: La Libertad, Remolino del Caguan, Rio Negro, Cachicamo, La Tagua, Araracuara, La Union Peneya. Rural centers of peasants settlers in forest reserve areas and areas subtracted from them.

They are the seed of new settlements that can consolidate, stagnate or disappear, depending on the economic dynamics of the place where they are, which is established between the perimeters of the municipal center and the municipalities´ limit, in the so-called dispersed rural area. 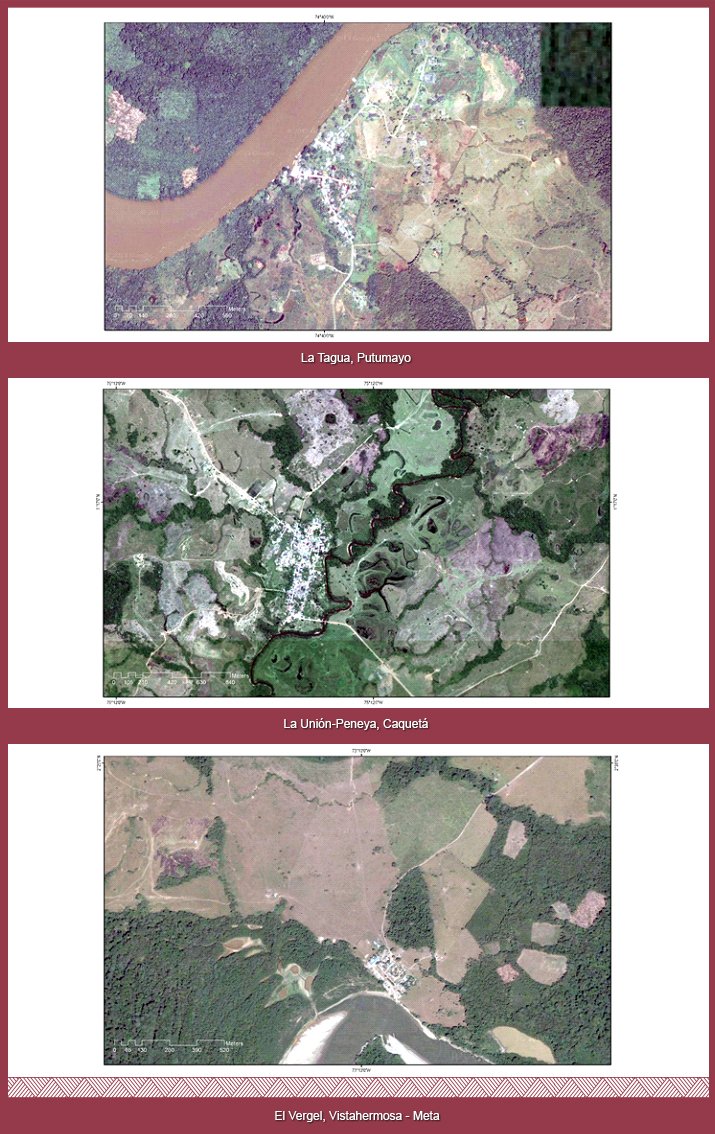 Indigenous Population Centers in and out of Reservations

They are the centers inhabited by the indigenous population who, in their contact process, have opted for this form of settlement, in order to access the programs and services provided by State institutions, forming housing nuclei with precarious institutional infrastructure. For example, Naranjales, Community km 11, Nazareth, Villa Fatima, Atacuari, Palmeras, La Paya. 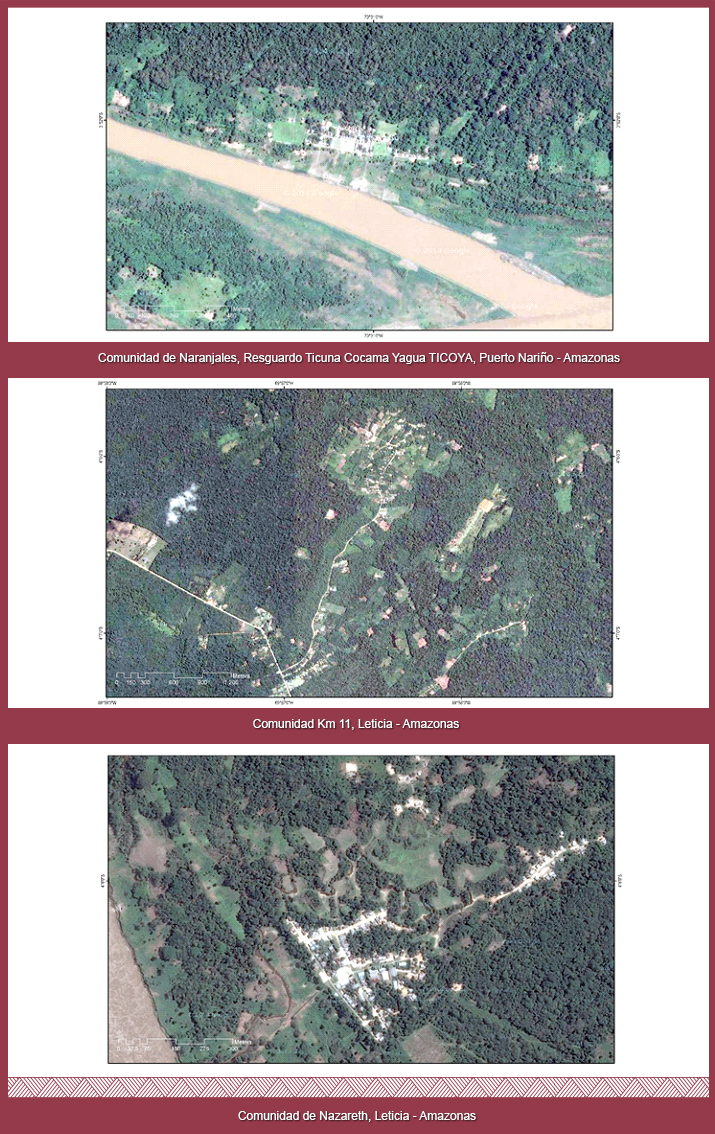 It refers to the rural areas of the municipalities excluding the populated centers. Conformed by the constellation of districts and farms belonging to the municipality, they are the primary cell of the social organization of rural peasant space. This habitat is characterized by the peasant house, the dispersion of dwellings, the building materials and their relationships with the elements available in the natural environment. They are also open frontier spaces, fronts of colonization or point areas, having established themselves as penetration sites, located on the banks of the main rivers or their tributaries and on the usable trails and roadways in construction, presenting an active population movement and a basically subsistence agriculture. They originate in the inequality of the structure of rural property and successive conflicts, first in the central areas of the country (Andean region) and then in the very consolidated areas of the colonization zones, which reproduce the pattern of rural spatial exclusion . In the social sphere, these fronts of colonization are driven permanently by the poorest population of the country or the consolidated areas of colonization.

This type of settlement can also be referred to as the emerging markets stage. In it connections and road infrastructure are improved, as well as transportation, infrastructure, land tenure security and legal action by institutions, leading to market opportunities. Such market opportunities and better living conditions attract a second "wave" of settlers (with a little more capital), able to undertake activities that give higher return to capital and labor, than in the early pioneer stage. Those pioneer settlers who have not accumulated sufficient capital to reach these levels are forced to sell their land and move to another pioneer front or to urban areas. 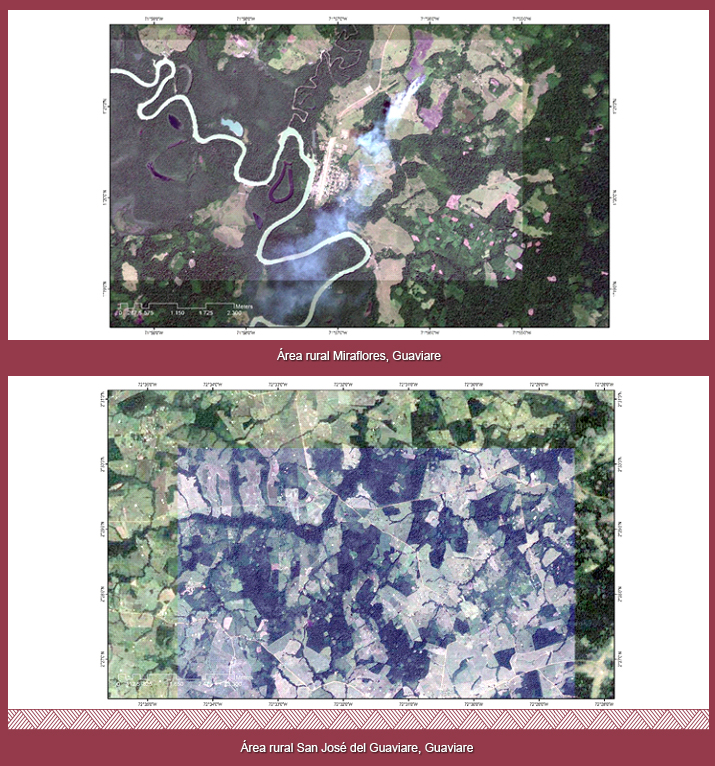 They correspond to territorial entities as reservations and legalized reserves, as well as to sacred, traditional and culturally important territories, recognized but not legalized. They express endogenous forms of social organization and in the process of integration into the market economy society. Its demographic base and its forms of social and productive organization have endured, in the last decades, a process of decomposition and disintegration. At present, they represent a very low proportion of the total population of the region and face a serious risk of demographic and cultural extinction, due to their size, the precarious biological and social reproductive conditions, the territorial displacement derived from the colonization processes and occupation of their ancestral territories, the processes of transculturation of their forms of economic and social organization, the depredation of natural resources and the pressure of the actors of the armed conflict, among others.

Although indigenous communities are the traditional occupants of the Amazon jungle regions, they have been forming part of the settlement system as they have been incorporated into mercantile circuits, making use of the State's institutional offer through the legal recognition of the territories, by the recolonization of traditional territories or the occupation by indigenous communities that are not of the region (this is the case of the Embera-Chami, from Choco, the Coyaima-natagaima, of Tolima, the Uitoto, from Trapecio), and in general, due to their struggle in search of the social, economic and cultural perpetuation of these indigenous peoples. Since establishing numerous populations in pre-Columbian times, they have historically endured a process of decomposition and disintegration of their demographic base and of their forms of social and productive organization, particularly in recent decades. 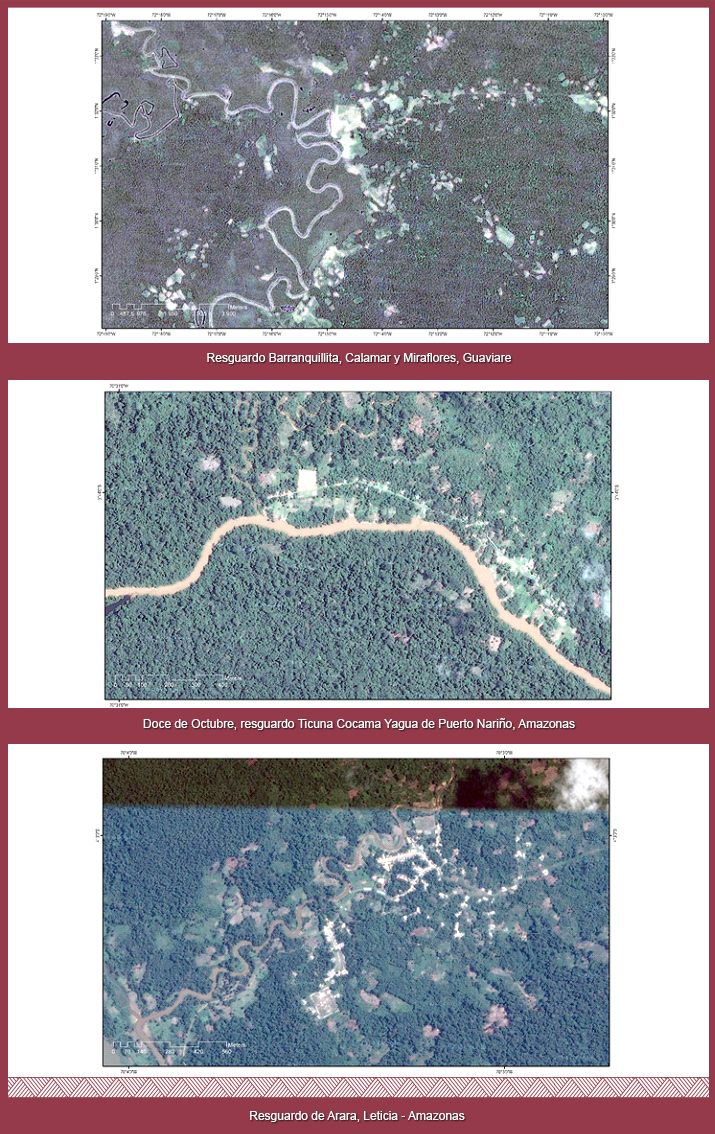 They are areas declared as reservations where their population builds temporary shelters and obtains from the environment everything required for their subsistence. At present, they are victims of displacement and face serious challenges of physical and cultural survival. The best-known example of these is the nukak maku. 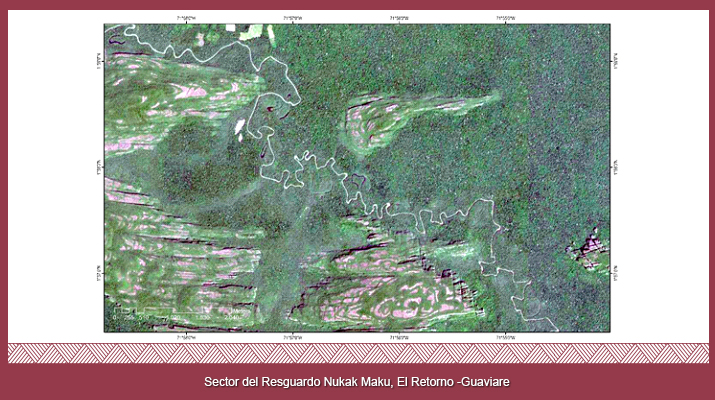 In the last two years, the scientific certainty of the existence of indigenous groups in isolation in the Colombian Amazon region was established. This is a decision made freely and voluntarily by a human group, to live according to their own rites and customs and thus create a cultural identity that is different from all other human groups. This typology is added to the set of ways of inhabiting the Amazonian territory. In fact, as documented by anthropologist Roberto Franco García, who died in 2014, in the interfluvial zone of the Putumayo and Caqueta rivers, to the east of the Cahuinari and Bernardo rivers and to both banks of the river Pure, an indigenous group is settled Which has resisted contact.

“In 2002, the Río Pure national park was established, with about one million hectares in the interfluvial zone of the Putumayo and Caqueta rivers, with the purpose of consolidating a conservation corridor from the Amazon River to Caqueta and, mainly, to protect from contact the isolated indigenous people known locally as caraballos, called aroje or people of Guama by the mirañas Indians of the and referenced in the ethnographic literature as yuri".

“In South America, the subcontinent with the most isolated groups in the world, about one hundred groups find refuge in the rainforest​ of the largest basin of all rivers, the Amazon [...] usually located on the borders of Amazon states, in the areas farthest away from means of communication and agricultural development [...]. In Colombia, there are serious indications of the existence of some ten or more indigenous peoples in isolation in the territory” (Franco, 2012). 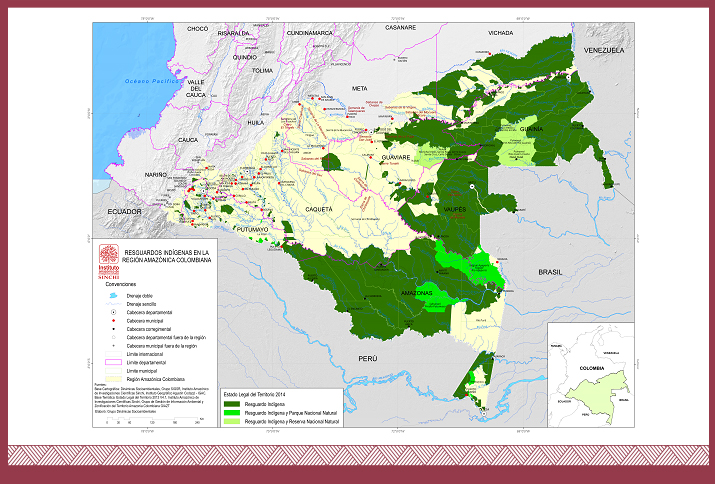