'IT'S A PERVERSE SYSTEM': HOW COLOMBIA'S FARMERS ARE REFORESTING THEIR LOGGED LAND

In the wake of Colombia’s peace deal, the rush to clear Amazon jungle for cattle ranches and coca caused deforestation to soar. A new scheme hopes to enable farmers to make a sustainable living from the forest.

In a cool forest patch along a rutted dirt road outside the Amazon jungle town of El Retorno in Guaviare, southern Colombia, Luis Vergara lifts his machete to clear a path through the brush. He walks through a 90-hectare plot of land he has replanted with valuable abarco trees – Colombian mahogany – in an attempt to replace what he logged from it.

“Almost everyone in this area grew coca. Many still do,” he said. “We grew tired of the coca and decided not to work that again.” Vergara eradicated the coca through an agreement with local authorities, and then cleared additional land for cattle. But evidence of deforestation still appears all along the hour-long journey to his farm.

The 52-year conflict with the Revolutionary Armed Forces of Colombia (Farc) provided a violent environmental shield against widespread deforestation, because the trees provided refuge for the guerrillas. The Farc built an illegal road south of Vergara’s farm, hidden under a canopy of trees, to transport coca from deep within in the jungle. As the Farc demobilised, deforestation soared by 44%in 2016 with a rush of land-grabbing to plant coca and clear land for cattle ranches. The Farc road has widened and now expands further into the Amazon, leaving an environmental scar of war... 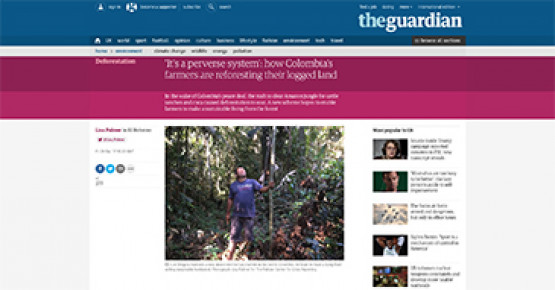