Fishing is an activity of high socio-economic importance for the riverside communities that usufruct existing natural resources, since it contributes to their nutrition and family income. The Colombian Amazon contributes a little more than 30% of the mainland commercial fishing mobilized towards Bogota. In this fish market small fishing villages and areas of neighboring countries Peru and Brazil participate and are supported by the contribution of catfish (fish without scales), some characins and osteoglycosides.

Fishing in the Colombian Amazon is regulated by regulatory measures based on catch sizes, size of tackle gear and some closed seasons. This document reflects the behavior of the sizes of the fish commercialized between 1995 and 2014, comparing them with the Minimum Landing Size regulated by the Colombian legislation.

Data on the lengths of catfish caught by commercial fishing are recorded during continuous fieldwork days in which biological and fishery variables are recorded, for areas of high fishing importance according to logistic availability: Puerto Leguizamo on the Putumayo River, La Pedrera/Araracuara on the Caqueta River and Leticia on the Amazon River (Figure 23), which are recognized as the main collection and commercialization sectors of fish caught in the Colombian Amazon and neighboring areas of Brazil and Peru (Valderrama 1982, 1988; Valderrama et al. 1993, Agudelo et al 2000, 2006, 2011, Barros and Ribeiro 2005). The information is grouped into biennia for ease of analysis, as proposed by Agudelo and Alonso (2002). The results of each biennium are compared with the baseline developed for the five-year period 1995-2000 (Agudelo and Alonso, 2002).

In Colombian legislation, the Minimum Regulated Size-TMR represents the biological condition of a species through the Average Size of Sexual Maturity-TMM. The TMM or L50, is understood as the average length in which at least 50% of the individuals of a population are suitable for reproduction, being thus considered as adult individuals (Vazzoler 1982, 1996; King 1995; Sparre and Venema 1997).

Thus, the Colombian fisheries legislation stipulated in Agreement 0075 of 1989 (Inderena 1989), the following references: 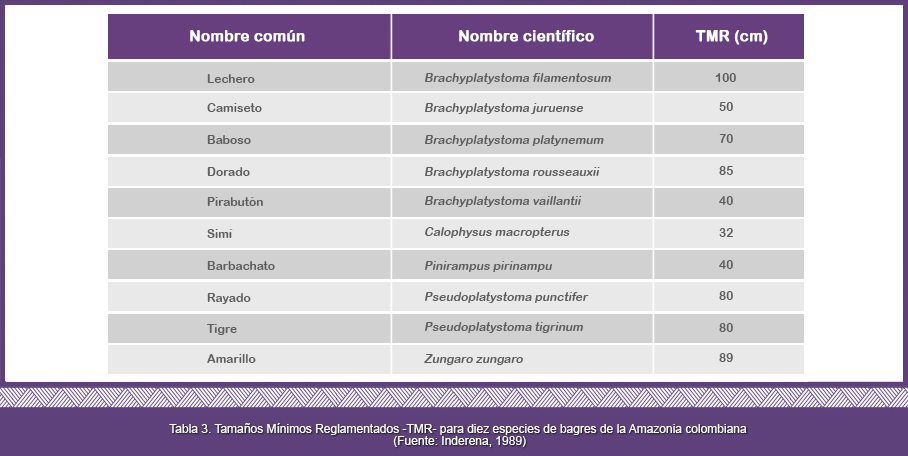 The analysis carried out by the Sinchi Institute were organized in standard lengths for each species and the number of animals that were below the TMR were counted for each, with which the index of individuals below the minimum regulatory size was calculated - IDTm  (according to Alonso and Agudelo 2002):

To facilitate the interpretation of the IDTm four classification categories were used based on the proportion of fish that did not reach the reference reproductive size and reproduce at least once in their life, before being captured in the commercial fishery, according to the proposal by Alonso and Agudelo (2002): 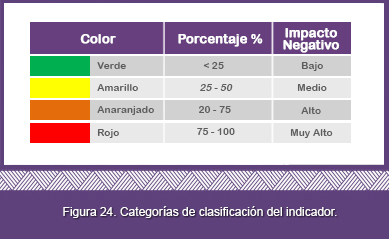