CALCULATION OF THE INDICATOR AND ANALYSIS

The results obtained and the analysis carried out of the commercial catch indicator of fish in Amazonia below the minimum landing sizes - IDTm are presented below, starting with the baseline diagnosis established with the historical information existing at the time the indicator was designed and later with each of the biannual updates made to date.

The result of the application of the indicator showed that the percentage of fish sold below the MLS in the Caqueta and Guaviare river basins was low, while a medium negative impact was estimated for that of the Amazon and begins to be high for that of Putumayo (Figure 25). Analyzing the evolution of the indicator for the main species, it was observed that for the most commercialized species, dorado, the percentage of fish under the MLS remained between 33 and 40% in the Amazon and Putumayo basins, with the exception of 1995 for the Amazon, when it reached 64% (Figure 26 a). For the other two basins (Caqueta and Guaviare), during the three years analyzed, the percentage was of low impact (Figure 26 a). 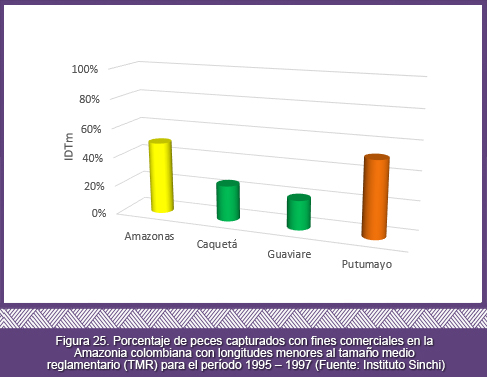 In biological-fishing terms, this means that fishing in the Colombian Amazon is exploiting a small portion of the dorados that have not yet reproduced. This indicates that, mainly in the Amazon and Putumayo, the resource has not had the opportunity to replenish the environment with a sufficient number of descendants that continue to ensure future yields at levels similar to the current ones. 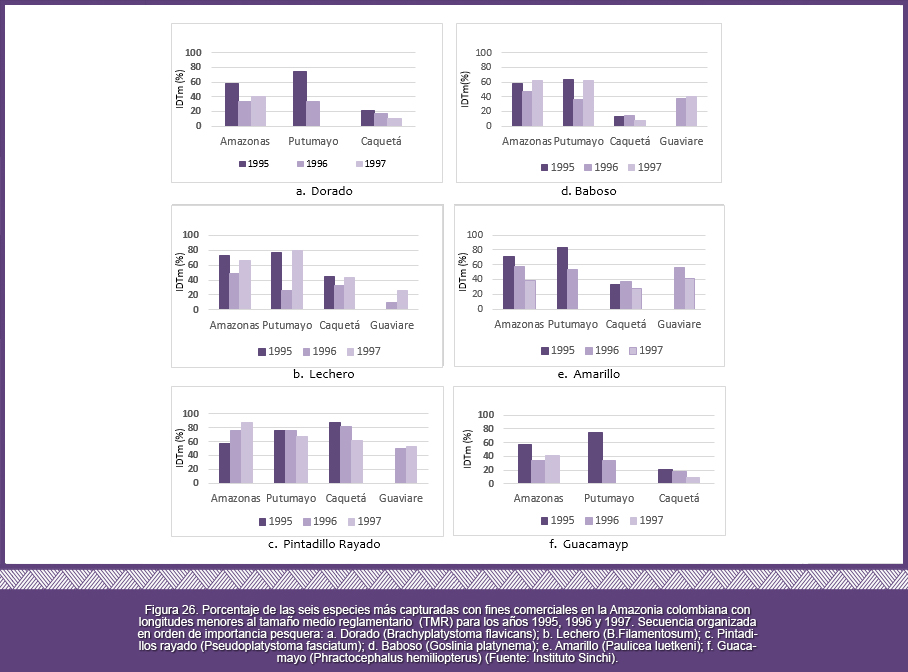 For Lechero, Baboso, Amarillo and Guacamayo, the level of exploitation below the MLS fluctuated between 40 to 70% for the Amazon and Putumayo basins (Figure 26 b., d., e. and f.) This leads to taking into account the same considerations made for dorado, with the difference that in these cases the indicator is giving a more accentuated warning signal. A special case was presented by the striped Pintadillo, for which in all the years and watersheds evaluated, more than 50% of the catches were of individuals smaller than the MLS (Figure 26 c.). Therefore, it is concluded that this must be the first species to work on in the Colombian Amazon in order to implement a series of appropriate management measures for the preservation of the resource.

For the Pintadillo, as well as for the other species it is evident that care must be directed towards the reproductive processes, insisting in some cases in the preservation of the spawning grounds and in others, in suitable capture timelines. Notwithstanding the foregoing, as indicated in the limitations of the indicator, the MLS are not specific to each basin and have not been updated for almost ten years, which could modify this table possibly for the benefit of the resource.

Fishing in the Amazon region is an everyday activity practiced since before the arrival of the conquistadors by the natives who used wooden canoes and a wide variety of fishing gears (Veríssimo, 1895). Fish, besides being one of the main sources of food, has become one of the few profitable alternatives that legally generate economic surpluses for the inhabitants of the region (Barthem, et al., 1995, Anzola, 1995; 1997, Fabré & Alonso, 1998, SINCHI-Inade, 2003).