In general terms, the results of this update indicate that a negative impact of fishing continues for the Amazon River, which went from 33% in 2002 to 53% in 2008, which places it in the category of high resource affectation. While in the Putumayo basin, the values have gone from 41 to 42%, its average is seen in Figure 33.

When the results obtained in the last two updates are analyzed year by year, evident is the tendency to overcome 50% of the negative rating of the indicator for the Amazon River and the fluctuations that the Putumayo River has presented below that 50% (Figure 34). It is important to remember that the selectivity of the arts and their application during certain hydrological periods have to do with the size of the individuals they trap.

We were able to analyze 8 species of catfish in the Amazon River and 5 for the Putumayo. In both cases, the pintadillos (Pseudoplatystoma spp.), were the species that contributed to increase the alarms for the indicator as they are a resource of high commercialization, for which, there is no respect in society for the defined sizes of capture (Figure 35 and 36). On the other hand, Simi is a species that has been consolidated as catfish of high commercial importance in the Amazon river with annual increases since 1998, its high voracity makes it easy prey and this results in a negative permanence of the size indicator for the period evaluated (Figure 35). 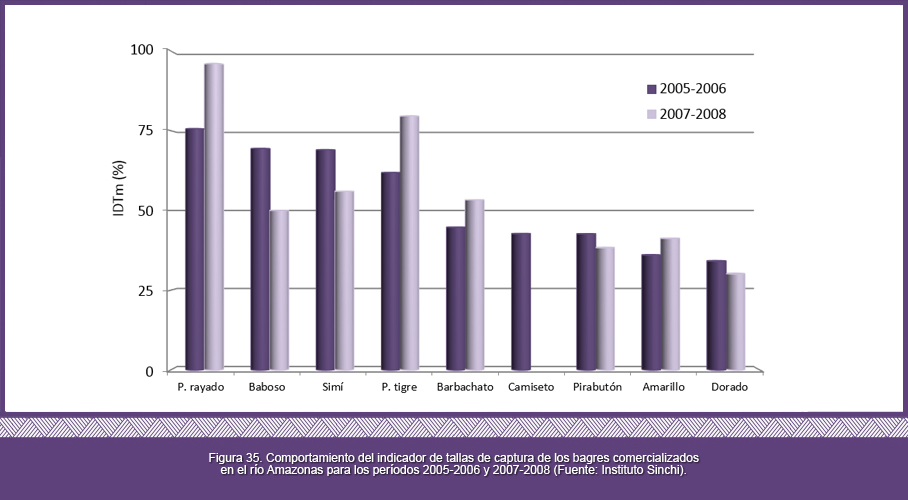 In the case of babosos, there was a slight improvement in both basins, as ocurred also with the simi. However, barbachato fishing increased the negative impact on the species by increasing the number of individuals caught below the landing size.

With the present update of the size indicator, it is possible to conclude and reiterate the need to advance immediate processes of fishery management starting with a consensual adjustment of the allowed catch sizes, together with the precision of the gear that can be used in fishing, which will lead to a felt decrease in the negative impact they have on fish, the current capture strategies implemented in the Colombian Amazon region.