When the Sinchi Institute developed the baseline of the indicator to know the impact generated by fishing effort on the catch sizes of commercially exploited catfish (Pimelodidae family), it found how the basins of Guaviare, Putumayo and Amazonas were moderately impacted by wages of fishing (between 25 - 30%), while in the Caqueta the impact was low.

The first update was made only for the Amazon River and showed an increase in the negative impact of fishing, from 33 to 52%, which raised the category of its resource affectation to high.

Of 9 species initially reviewed 10 could be evaluated (including Guacamayo) and from a period of 5 years of records, it was possible to specify 1 out 2 for greater clarity. Species that initially figured as having a high negative impact went to medium impact and vice versa. And species with low impact appear more affected (Figure 27).

The foregoing is explained on the grounds of the freedom of fishing to be able to use different environments and to apply various types of gear on some catfish such as Pintadillo-rayado, Amarillo, Pintadillo Tigre and Guacamayo, which makes them vulnerable and a catch constant. Being species of medium migrations, it is possible to find different ranges of sizes in the exploited environments (from juveniles to adults). Therefore, the fishing effort subjects the species to an alarming state of misuse of the resource, which leads to a negative evaluation of the activity in the Amazon River.

The apparent recovery of Lechero and Baboso, which went from a high negative state in the baseline to an average negative one in 2004, is striking. This result had nothing to do with the positive effects of any regulatory or preventive measure regarding the good use of the resource, on the contrary, it´s the result of a fishing effort of many years that decreased the amount of these species in the catches, replaced or displaced by other species in the commercialization such as Simi, Barbachato, Camiseto, Pintadillos and others catfish (Figure 28). As a consequence of this process, the change that Simi has made from low effect to medium negative effect in recent years is noted. 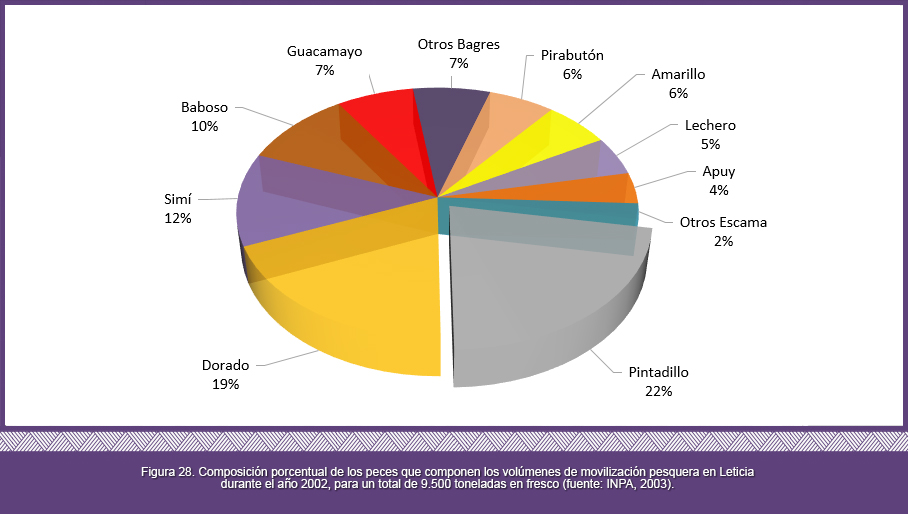 On the other hand, the great attention that the commercial use of Dorado and Pirabuton awakens throughout the Amazon basin, and the efforts of the fishing and control organisms for a good management of this resource, have caused a slight decrease or stability of the negative effects of the fishing activity on these species. But, the repurcussions on the fishing resource in the Amazon River does not only correspond to the result of activities by Colombians. It is also as a result of the work of Peruvian and Brazilian fishermen. Therefore, the consecuences of the observed changes are also the reflection of fishing at the regional level (Brazil - Colombia and Peru).

With this review, we reiterate the need to urgently implement management measures based on fishing gear usage models (based on their selectivity), on the water regime of the environments used and on the biological conditions of the exploited resource. Not only at the local level, but in terms of the regional scope, which includes the three countries, in the search for the sustainability of this commercial activity of wide social use in the region.