INTRODUCED SPECIES IN THE COLOMBIAN AMAZON

In Colombia, the variety of ecosystems includes habitats from páramos to tropical forests, wetlands, Orinocene plains and deserts. This variety of ecosystems increases its biological diversity, which in floristic terms, is estimated at about 25,000 species. However, in the country there is a large number of exotic or introduced plant species, which due to their range of useful products (fruits, pulp, wood, tannins, medicines or ornamental species), have been moved by humans from their original habitats to other regions for many centuries (Mathews 2005).

Human beings have domesticated about 2,000 species of plants for food, of which about 150 are commercially cultivated in the Introduced Species in present-day Amazon (Mukerji 1997); and several of these species have managed to take root in the culture of the peoples of the entire world. Similarly, man has favored the introduction of numerous ornamental species (Varon et al 2002, Esquivel 2009, Mahecha et al 2004, Hernandez-Schmidt & Knap 2003, Carbono 2003, Carvajal & Chacon 2000), a situation that has reached up to 83% of species introduced in the decoration of the city (Cardenas et al., 2005).

In this process, the introduction of some species with invasive potential has been stimulated, which has generated the displacement of native species, and as a consequence the loss of environmental and landscape benefits that this means. At the international level, a document has been published that reports the 100 worst invasive species in the world (Lowe et al., 2004), where plants are the most abundant group with 32 species of terrestrial plants and 4 aquatic plants.

On the other hand, the Global Compendium of Weeds (GCW) contains about 28,000 species of plants, of which approximately 1,000 have been listed as invasive.

Invasive species are considered throughout the whole world as Introduced Species in the Amazon as the second reason for the extinction of species, after habitat loss (Wilcove et al., 1999, McNeely et al., 2001). In this regard, the Ministry of Environment, Housing and Territorial Development (MAVDT) issued Resolution Nº 0848 of May 2008 in which five species of exotic or alien plants present in Colombian territory are declared as invasive, among other organisms; they are Buchon de Agua (Eichornia crassipes), elkhorn sea moss/seaweed (Kappaphycus alvarezeii), Common gorse/thorny (Ulex europaeus), Cape broom/smooth (Teline monspessulana) and molasses grass/grass Yaragua (Melinis minutiflora).

On the other hand, García (2004) argues that invasive plants have high seed production with short intervals between production periods, general pollination systems, hermaphroditic flowers and rapid growth from the seedling stage to sexual maturity. In turn, Ríos and Vargas (2003) consider that invasive species have high dispersal capacity, the ability to reproduce sexually and asexually, high tolerance to environmental hetererogeneity, ability to use a wide variety of resources (generalist species in habitat) and they are closely associated with environments intervened by human beings. Badii and Landeros (2006) affirm that the plants most likely to become invasive are mainly aquatic or semi-aquatic, grasses, nitrogen fixing species, vines and clonal trees.

On the other hand, the different colonization processes of the Colombian territory have generated a flow of species from one region to another, with which species have been transplanted among ecosystems to the interior of the country.

Species Introduced to the Colombian Amazon

The first record of Introduced Species in the Colombian Amazon, according to Cardenas-T.(2010) Introduced Species in the Amazon, corresponded to one hundred and sixty (160) species. Recently after systematic work evaluating the ornamental flora, the different productive systems and research centers in different Amazon cities, as well as different publications that document the ornamental flora of some cities, a list was generated that includes information on ornamental, food, timber, forage, medicinal and cultivation weed species, for a total of 250 species of plants introduced to the Colombian Amazon.

There is no international consensus on the use of definitions, in this sense there are literal translations from English into Spanish, with terms that are misused in the strict sense. Therefore, a group of researchers from the Institute of Marine and Coastal Research (INVEMAR) from the Jorge Tadeo Lozano University, the Universidad Nacional de Colombia, the SINCHI Institute of Amazonic Scientific Research and the Alexander von Humboldt Research Institute of Biological Resources, in a meeting on September 14, 2009, assumed consensus in terms, definitions and adjusted and adopted synonyms related to invasive species, within the framework of Colombia´s Scientific Authorities.

Distribution of species introduced to the Colombian Amazon 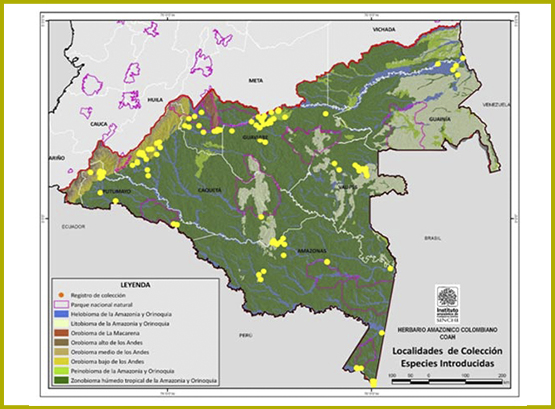