The degree of knowledge of the Amazonian flora is evidenced through this analysis, based on botanical specimens deposited in the Colombian Amazonian Herbarium COAH (See methodological development). Information is presented that allows decisions to be made in order to increase knowledge in areas of the territory that present information gaps; as well as to increase the analysis or specific studies in the areas where more information exists. 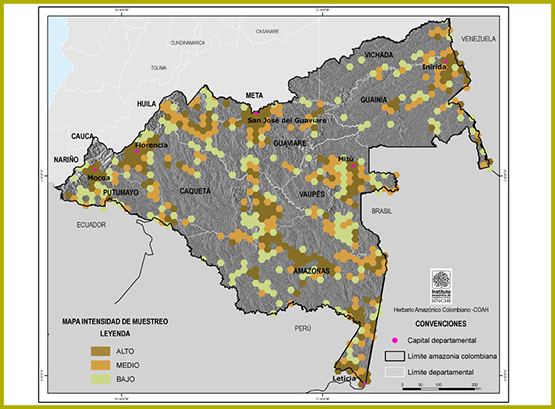 The characterization of the vegetation has included all the great landscapes, biomes and most of the ecosystems present in the Colombian Amazon region, such as firm land forests, flooded forests, white sand natural savannahs, savannahs of Orinocan origin, rocky outcrops, catingas and shrubbery. 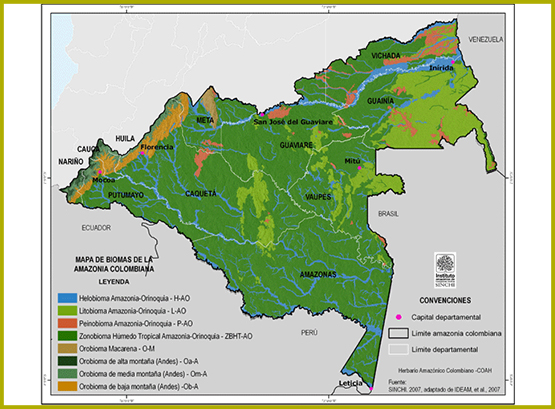 According to the Annual Balance Statement for the State of the Ecosystems and the Environment of the Colombian Amazon. 2006 (Sinchi, 2007), in the Colombian Amazon we find the Great biome of tropical humid forest, within which at the level of types of biome, the region is represented in 64.9% by the Zonobiomes of tropical humid forest; the Litobiomes (rock formations of the Amazon) with 14.5%; the Helobiomes (areas of high aquatic influence such as the alluvial plains of the Andean and Amazon rivers) represent 12%; the Peinobiomes (areas of high plains - Yari and La Fuga savannahs) occupy 3.4%, and the Orobiomes (mountain areas-eastern remnant of the eastern mountain range) the three subunits: low, medium and high mountain occupy 4.7 %. The map shows the distribution of the biomes in the Amazon region.