The Amacayacu Permanent Plot is framed in research on a global and long-term scale, which is supported in an Interagency Cooperation Agreement celebrated between the Amazonian Scientific Research Institute SINCHI, the Universidad Nacional de Colombia university, the Universidad Nacional Colombia in Medellin and the Special Administrative Unit of the Natural National Parks System; it currently has the technical and scientific support of the Center for Tropical Forestry Sciences -CTFS of the Smithsonian Tropical Research Institute - STRI (for its acronym in English). In 2005, the Smithsonian Institution convened institutions with regional initiatives on the subject in Panama, finding strength and academic and institutional resillience to the work previously initiated by the SINCHI Institute, giving technical and operational support to the Amacayacu Permanent Plot.

The layout of the Amacayacu Permanent Parcel was made in 2005 when a Co-research relationship was established with the Local Indigenous Community of Palmeras. 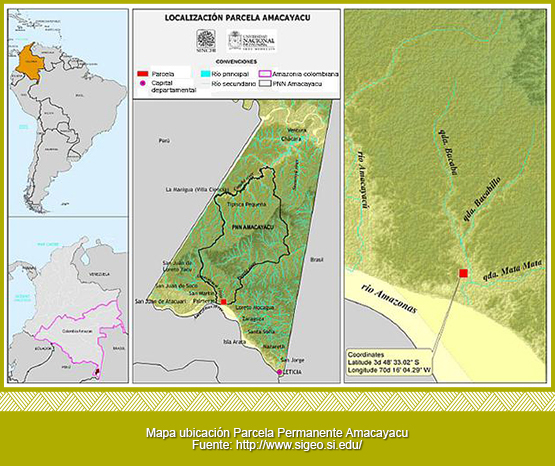 The Amacayacu Permanent Plot belongs to the Global Network of Forest Parcels of the Center for Tropical Forest Science - CTFS, of the Smithsonian Tropical Research Institute - STRI. Because all plots follow a unified scientific methodology, researchers can directly compare data collected from different forests around the world and detect patterns that would otherwise be impossible to recognize. 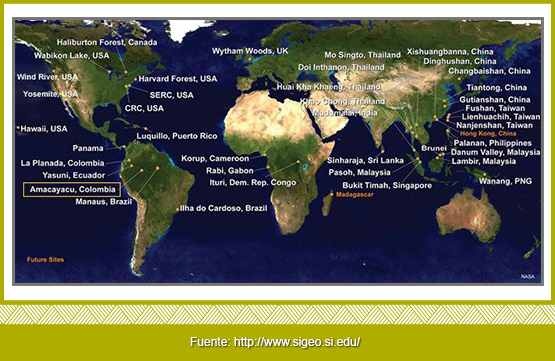 Using data from the global network of large-scale CTFS forest plots, researchers are responding to scientific questions about tropical forests that were impossible to answer just a few years ago. The standardized data obtained from studies on forest diversity and dynamics provide valuable information to assist in the determination of forest management and conservation strategies.

In 1980, ecologists from the Smithsonian Tropical Research Institute-STRI established the first plot on the island of Barro Colorado, Panama. This plot was a pioneer in implementing long-term tree census techniques. Due to this, researchers replicated it throughout the tropic, giving rise to the creation of a network of forest research plots that would later become the Center for Tropical Forest Science. Before1980, scientists had never tried to measure tropical forests so intensely and on such a large scale. Today the scale and intensity of the CTFS research program is unprecedented in forestry. Participating in the CTFS plots are hundreds of researchers from more than 40 institutions around the world. Each plot is guided and administered in each country by one or more associated entities. The long-term nature, the large-scale nature of the joint CTFS data allows scientists to answer these questions.

The most abundant families in the forests of the Amacayacu plot, such as Myristicaceae, Moraceae, Meliaceae, Lecythidaceae and Arecaceae, coincide with those also reported as the most abundant. This pattern supports the existence of a high regional dominance of relatively few taxa and the generalist character of most tree species in terra firme forests within the northwestern Amazon. Contrary to the above, in general, the species that contribute most to regional diversity, are the rare species, characterized by low local abundances.

28 corological novelties have been found for the country. Among all these corological novelties, worth highlighting is a first record of the genus Angostura (Rutaceae) for Colombia and at the species level, 27 novelties were recorded. The families with the highest number of new records are Piperaceae, Mimosaceae and Lauraceae, with three species each. In relation to the inventory presented by Rudas and Prieto (2005) for the PNN Amacayacu, 206 floristic novelties are registered, among which 171 are found at the species level, 30 at the genus level and five families of angiosperms, which are: Aquifoliaceae, Lepidobotryaceae, Magnoliaceae, Rosaceae and Styracaceae.